A Guide to Programmatic Advertising: What It Is, How to Utilize It & What You Need to Know

Programmatic Advertising has been on the rise since 2019, continues to see growth through 2022 and is projected to grow at least 15% in the next two years.

These ads are placed on websites and social media apps and are triggered when a user clicks on a link. Programmatic advertisements collect data through a user's browser history and location, which enables them to accurately target users with tailor-made ads giving advertisers the opportunity to capitalize on a higher impression count, a wider reach, and maintain accurate targeting to your audience.

What Are Programmatic Ads and How Do They Work?

The digital space where these ads are placed are run by ad exchanges, where the auctions are operated through automation, also known as a transaction.

1. The advertisers who want to purchase the space
Advertisers use Demand Side Platforms (DSPs) to purchase ad placements across different publisher websites, but are specific enough to target users based on the information provided through searches such as browsing history and their location. Publishers offer up impressions through ad exchanges which function as an ad marketplace, where DSPs decide which impressions would match a specific advertiser.

2. The publishers/website owners who are looking to sell their space
Publishers use Supply-Side Platforms (SSPs), which are platforms that publishers (sellers) use to manage and sell the available ad space on their websites. These placements can take the form of display and video ads to website visitors. SSPs are great for looking to sell a space on their website to an advertiser – or in other words, the SSP used would function as the seller for the publisher.

There are various programmatic advertising platforms, such as StackAdapt, that act on behalf of the advertiser as their DSP to purchase a publisher's space. As a DSP, StackAdapt connects with Ad exchanges and decides which space to buy based on a brand's demographics, location, browsing behaviour, and budget while combating issues such as coordinating content, assets and bidding on locations where ads have potential to thrive.

The Types of Programmatic Ad Exchanges

There are generally three types of programmatic advertising for advertisers and publishers to interact when purchasing ad space.

This is the most popular form of purchasing ad space, as there is no direct contact between the advertiser and publisher with the ad spaces from the publisher open to any bidder. The advertiser is responsible for defining the audience, to ensure the correct ad is displayed to the correct users. This exchange is the most open and easy to access of the three listed, and would be the most versatile. Newer brands to programmatic advertising may opt for this, since the listings would be limitless and there likely would be a lower risk involved since you would not have to commit fully to this practice.

In this exchange, the publisher may have a popular ad space in high demand. Publishers generally capitalize on this by requesting a higher initial bidding price and can limit the amount of companies to bid. It is considered private since the placement is not offered to the entire market, but instead a select number of advertisers, involving direct communication between both parties. This exchange is more specific than Open Exchanges, and the competition may be more intense due to advertisers having more knowledge of the space to what spaces and audiences they may be targeting.

This form of programmatic advertising revolves around the publisher reserving the ad space for an individual advertiser. The terms are agreed upon beforehand, usually with no bidding. The barrier to entry for these exchanges are higher since they require communication between both parties, and would generally work more effectively with advertisers who are set on using programmatics as a main platform.

How Do Programmatic Advertisements Work?

The process first begins with a platform or space that can feature these types of ads.

1. From there, the Publisher first lists the ad space for users in the form of their SSP, which acts as a seller for the publisher, giving the advertiser information such as components of the website in relation to the user’s traits which allow for bidding through DSPs – basically listing the space for sale.

2. When the SSPs obtain enough information on the ad space, they further evaluate targeting information such as geography, demographics, and interests.

3. Following the evaluation of information, the DSP then reviews all information the SSP has provided, then acts as the middleman which then determines which ad space matches up with an advertiser’s budgets and targeting. The ad space is then assigned based on a user’s traits and their fit on the website.

4. DSP then makes a bid on the ad placement on behalf of the advertiser, happening in real time (referred to as real-time bidding).

5. When the SSP receives bids from different DSPs, the SSP will then pick a winner.

6. The SSP will then display the ad to the user on the publisher’s site after the winning bid is picked.

What Are Some of the Trends of Programmatic Advertising?

Programmatic advertising is on the rise due to their ability to tailor advertisements to a specific market. One of the trends involves the technical evolution of 5G networks. With these advancements, 5G provides Programmatic Advertisers the benefit of increased speeds, leading to better ad viewability.

The expansion of various streaming services and how they impact consumption of media has brought new opportunities to programmatic advertising. The increase in OTT (Over The Top) and CTV (Connected TV) use provides mass potential for these ads. OTT refers to all the streaming services available on the internet, while CTV refers to the television sets which provide the ability to stream media through the internet. The increasing viewership and monthly users of these platforms  provides more potential spaces for ad placements on YouTube, Disney Plus, Amazon Prime, and more.

According to EMarketer’s article, the United States’ spend in 2020 amounted to $75 billion USD, with 2021 increasing to $105 billion, and finally with 2022 projected to total to $123 billion. EMarketer also projects that in 2023, this will reach $141.9 billion. We see an upward trend in these advertisements due to technological advancements tied in with the growth of CTV and OTT.

What Are the Different Types of Programmatic Ad Formats?

With the process of these ads in mind, let’s take a look at the different forms of how programmatics take place.

Often the most common ads, they appear on desktop, mobile, and even tablet devices, taking the form of a banner ad. They appear on top, to the side, or even at the bottom of webpages and applications, which can assist with brand appeal, a wider reach, as well as higher CTRs.

Video-based programmatic advertisements benefit from having relevant content to what the user is consuming, which can potentially allow brands to stand apart from competitors and reach a more qualified audience. These ads can especially have a strong impact on OTT and CTV channels as mentioned earlier. OTT channels such as streaming platforms and CTV devices such as smart TVs and gaming consoles provide advertisers with many opportunities to target a specific audience which can result in higher-performing metrics.

These ads allow brands to advertise on digital billboards which are ideal for grabbing consumer attention due to their visual and creative nature that cannot be skipped or ignored.

These ads are able to integrate seamlessly into gameplay for brand promotion. They appear on mobile, computer, and console games — providing opportunity for a highly-engaged audience. They seamlessly blend into the games without interruptions – potentially easier for the audience to digest the advertisement.

What Are the Pros and Cons of Programmatic Advertising?

There are many benefits to programmatic advertising, especially pointing to its growth throughout the years. However, there are some limitations that come with selecting this form of advertising.

Transparency: advertisers know where ads will appear, ensuring they are placed in relevant spaces.

Reach: easily reach the audience through relevant behaviours such as browsing activity.

Commoditization: increasing popularity means that some ad spaces may be challenging versus competitors. Increased competition may mean limited ad visibility depending on budget, with higher CPCS.

Automation: allows control to a certain degree, but mostly relying on publishers for placements provided and may lack some manual controls if needed.
Learning Curve: as a quickly growing platform, playing catch up may be overwhelming.

Should You Be Using Programmatic Advertising?

Programmatic advertisements can be summed up by the processing of buying and selling ad space using online traffic data and online display data to drive impressions. The buying and selling of these spaces are run by exchanges, which are automated through bringing together two parts of a transaction – the advertisers who want to purchase the space via Demand-Side Platform and the publishers who want to sell the space via the Supply-Side Platform. One of the main benefits of the ads is efficiency, however the growth of programmatics also sees a growing trend of competition. These exchanges are only becoming increasingly popular, and have seen consistent growth since the year 2019, and projected to increase in the upcoming years.

Are Programmatic Ads For You?

While there are some reasons that may deter you from using programmatic Advertisements – increasing commoditization, higher learning curve, and lack of transparency through automation – there are many practices you can take to work around some of these drawbacks. Not using these ads could pose the risk of advertisers falling behind their increasing competition.

According to Agency Analytics’ article, an essential practice to maximizing performance is aligning your objectives with the correct platform while also maintaining a plan before launching on the platform. Essentially, you should be aware of the goals you are planning to achieve through programmatics, whether it be driving impressions or conversions – selecting the correct KPI and bidding models is essential. When planning out your goals, you must take into account which demographics you are targeting, and their characteristics for efficient campaign performance.

They also suggest segmenting your audience, or split down your targeting based on a customer’s journey. This ties into aligning your objectives. Having distinct creatives based on the type of audience you’re targeting, can make or break the level of success of your advertisements.

Finally, they suggest proactively enhancing the efficiency of your campaign for both performance and extra foresight. This could include making adjustments based on the domains that are underperforming, and looking to create more opportunities through well-performing segments. This foresight for driving efficiency can also lead to leveraging data for more campaigns to boost performance – such as viewing which creatives are performing, or even user-specific data such as audience types, and the types of ads they respond to.

With all of this in mind, programmatic advertisements can align with both Ecommerce and Lead Generation focused advertisers.

Ecommerce brands first benefit through a streamlined experience of achieving KPI goals through expanded audience insights. The process of improving your campaigns will benefit through leveraging the data collected for efficient ads which may result in increased performance since programmatics allow advertisers visibility into valuable user data. The automation of these ads allows advertisers to save time, while also increasing the overall efficiency of ad campaigns being published. Similar benefits come alongside Lead Generation-driven campaigns since programmatics allow advertisers the benefit of presenting advertisements to the correct audience. The correct audience further allows advertisers to target specific accounts in a precise fashion which can also translate into qualified leads. 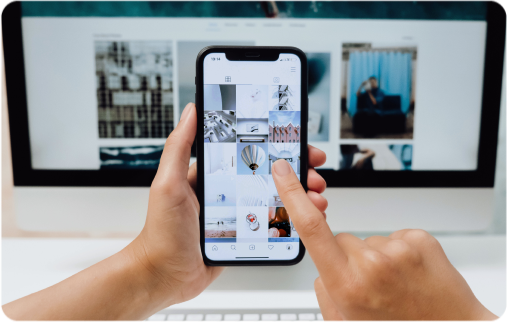 Ecommerce Brands: Here’s Why Your Ad Creatives Aren’t Getting Any Clicks

Low engagement? Little clicks? No CTR? There’s a lot that goes into improving these metrics, but have you ever thought about the visuals behind your campaign?
Learn More 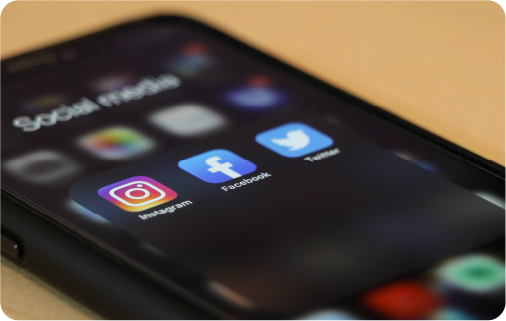 Which Ads Platform Should I Advertise On: Social or Search

Deciding on whether to run social ads or search ads can be a daunting task. Each business has its own set of unique challenges so there is no real one-size-fits-all solution when it comes to advertising.
Learn More